Liz Saville-Roberts AS/MP and Mabon ap Gwynfor AS/MS will hold a surgery on Friday 9th December at the Literary Institute, Aberdyfi.  Scroll down for more information:

END_OF_DOCUMENT_TOKEN_TO_BE_REPLACED

Picnic Island Bridge to be installed

Great news! The new bridge at Picnic Island will be installed on the 14th and 15th November. The road will be closed between 7pm and 6am on those nights, with traffic lights in place the rest of the time, from the 10th November. Spotlight...

END_OF_DOCUMENT_TOKEN_TO_BE_REPLACED

Aberdyfi Community Council joins the nation in mourning the death of Her Majesty Queen Elizabeth II. A book of condolence has been opened in the Reading Room at the Literary Institute and floral tributes can be left at the top of the ramp outside St. Peter’s Church....

END_OF_DOCUMENT_TOKEN_TO_BE_REPLACED

Tuesday 21st June, 7pm Neuadd Dyfi All welcome - FREE tea and cake! Including news from the Community Council, AA&I, Neuadd Dyfi, Aberdyfi Community Projects group, the Health Centre and YOU! Come along and help us make Aberdyfi the best place to live and...

END_OF_DOCUMENT_TOKEN_TO_BE_REPLACED 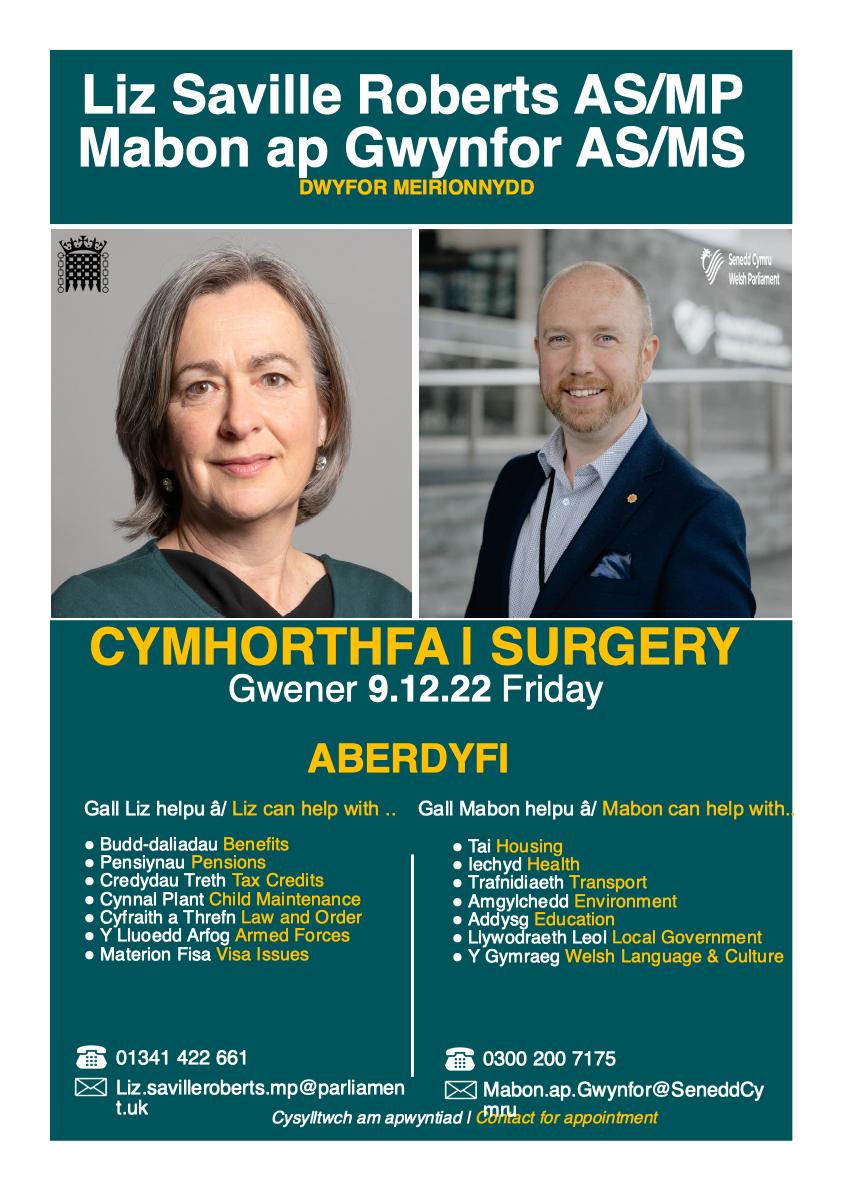 The Chair welcomed everyone and informed that Council that he noticed some new electric car chargers are being installed in the main car park. He also reminded everyone that there is a meeting at the Neuadd Dyfi on Thursday 20th October to discuss the ‘Our Area 2035’ consultation with Gwynedd Council.

AGENDA ITEM 4 – To receive and confirm minutes of the ordinary council meeting on 26thSeptember 2022.

It was noted that residents are still experiencing great difficulty in contacting Tywyn Health Centre and getting a GP appointment. It was agreed to encourage residents to complain to BCUHB if they have problems. It was agreed to ask a representative

from the Health Board to attend out next meeting.

Action: Clerk to put BCUHB contact details in Rushlight and to request a representative to attend the next council meeting.

Clerk has asked GL Jones to repaint the swings and roundabout and repair the wet-pour at the base of the helter-skelter. It was agreed to get the benches bolted to the ground

Action: Clerk to arrange for benches to be bolted down.

Cllr O’Neill reported that the clerk and herself had a meeting with Planning Aid Wales, who explained that a Place Plan only covers planning and land use issues. They suggested that a Community Action Plan might be of more use to Aberdyfi, as it is much more holistic and would link well with the Community Needs Survey carried out last year. They offered to do some bespoke training for the council with a session entitled ‘Is a Place Plan Right for You?’ for £600 but it was felt that this wasn’t required and the Council should pursue a Community Action Plan instead. It was agreed to delegate this to Cllr O’Neill and the Clerk to take forward.

Action: Clerk and Cllr O’Neill to research a Community Action Plan and report back.

Cllr Owen informed the Council that there was an emergency meeting of the full Gwynedd Council last week to discuss the current financial crisis. He reported that Gwynedd Council are facing a deficit of £7.1 million this year but as they have reserves of just over £8 million, the shortfall will be covered in the short term. However, there is a projected deficit of £18 million next year in Gwynedd (£260 million for the whole of Wales) and Cllr Owen expects local councils to be asked to take on more of the burden of providing services.

Cllr Owen also informed the Council that Gwynedd Council are hoping to provide free parking between 10thand 27th December in their car parks.

It was felt that this development was an overdevelopment and not in keeping with surrounding buildings, would impact the amenities of neighbouring

properties. The development will also substantially alter the look of the building and as it is in the Conservation Area, the council agreed to object to the application.

Action: Clerk to research the possibility of Council’s listing buildings.

The Clerk asked the councillors attending the Annual meeting with SNPA to request SNPA to start reporting back on the issues raised by the Community Council as the Clerk is never clear if issues have been dealt with or what the outcomes were.

Action: Councillors to request feedback on issues raised by the Community Council

The issue of the swimming pool at Balkan House was raised and the clerk informed the Council that she had emailed SNPA about the issue but hasn’t heard anything back.

It was noted that there seems to be a fourth unit being built at Crychnant (application NP5/50/144C) when planning was only given for 3 units.

Mr. Phil Morgan gave a presentation on the type and scope of information boards that the Aberdyfi Biodiversity Group would like to install in the village. Three locations have been identified – at the gas works, the Golf Club car park and at the top of the pedestrian slipway onto the beach by the RNLI station. All signs will be bilingual and give information on the various protected areas, wildlife and the Biosphere Reserve. Each sign will also signpost to the other information boards. It was agreed to ask Mr. Morgan to obtain a design and full quote for the information boards and forward them to the council for a final decision.

Action: Clerk to liaise with Mr. Morgan to obtain design and quote. Clerk to add to agenda for next meeting

Action: Clerk to respond to the consultation requesting clarification and suggesting which other buildings be included.

It was noted that the Buddleia in Nantiesin car park / street needs cut back and should be added to the list. It was also noted that the vegetation between the fire station and the subway also needs cut back, but this is the responsibility of Network Rail. Cllr Owen informed the council he has a meeting with Network rail in the next couple of weeks so would bring it to their attention then. It was agreed to delegate the Ardal Niproject to Cllr Tyrrell and the Clerk and they should arrange to meet with the Ardal Ni team to discuss it further.

AGENDA ITEM 13 – To discuss funding for the Food Festival 2023

Cllr Owen informed the Council that he had met with the organisers recently and they estimated that costs for next year would be approximately £4,600. It will be held on Sunday 20th August, the day after Race The train. It was agreed that the Food Festival is a great event for the village and the Council will support the organisers in their efforts next year.

Cllr Hewins informed the council that he has spoken to both the English Church and St. Peter’s and they have decided not to offer anything at this time as they do not see an immediate need, as the drop-in centre provides a warm space. It was noted that the drop-in centre only runs one day a week, so there may be a need on other days. The churches have agreed to let Cllr Hewins know if they identify there is a need on other days, at which point the council would discuss if it is able to contribute any funding. Cllr O’Neill suggested that the Neuadd Dyfi would be a good place to use as it has the ground-source heating which is always on and the clerk suggested that the Reading Room would also be worth considering, as it is open 6 days a week and is heated during the day.

It was agreed to assess if there is a need before committing funding.

The clerk informed the council that she is working with Tywyn Town Council, Tywyn Library and the Cinema to create a list of welcome warm spaces in the local area.

Action: Councillors and Clerk to speak to residents to assess if there is a need for a welcoming warm space.

Action: Clerk to add to Rushlight

* Transport problems in the village

Residents have reported that they have problems accessing the village as they do not drive and are unable to walk down the hill and have asked if there is something the council can do about it. It was agreed to speak to more residents to assess the need before committing funding and to suggest car- sharing.

Action: Clerk to put in Rushlight

Cllr Owen informed the council that the bridge is due to be installed overnight on 14th November. Cllr Tyrrell informed the council that he had been keeping the path along the estuary clear but that the steps from the estuary to the bridge are now very overgrown and need to be cleared. It was agreed that Cllr Tyrrell would check the path and steps, find out who is responsible and arrange for the steps to be cleared.

Action: Cllr Tyrrell to check and arrange for the steps to be cleared

Cllr Tyrrell informed the council that there has been no significant progress on the cycle path.

AGENDA ITEM 18 – Date of next meeting

It was agreed to bring forward the date of the December meeting to 12th December, as the clerk is unable to attend on the 19th.

There being no further business, the Chair closed the meeting at 9.35pm

ABOUT
Welcome to Aberdovey
History of Aberdovey
Pics from the Past

You can delete cookies at any time using the settings in your web browser.
Necessary Always Enabled
Necessary cookies are essential for the website to run properly. This category includes cookies relating to basic functionalities and security features of the website. These cookies do not store information that can personally identify you.
Non-necessary
Non-necessary cookies are not required for the website to function. They are used to collect visitor stats via Google Analytics and usage data for areas of the website. All cookies can be deleted at any time using the settings on your web browser.
SAVE & ACCEPT